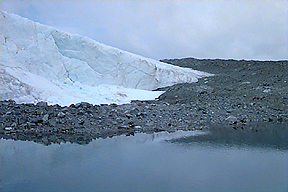 (excerpt from manuscript in prep.)

No mayflies are known from present-day Antarctica (Gressitt 1967), although the well-known Gondwanian distribution of many mayflies almost demands that they were once present. Dr KS Swadling (pers. comm.) has investigated several coastal lakes which would be the most likely extant mayfly habitat and has found no Ephemeroptera.